Durga And Shiva | Goddess Durga as symbol of auspiciouness 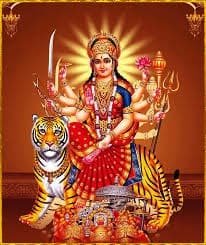 Durga is one of the female gods of hinduism. According to puranas goddess Durga was an avatar of lord shiva’s wife parvati. The legends said that the gods couldn’t defeat the buffalo demon Mahis, who was threatening the existence of the world. Lord Shiva realised Parvati that she can kill Mahisasur. With the help of all shaktis of trinity, Parvati manifested herself as Durga.

When Mahisasur had defeated Indra and became the king of heaven, the Brahma Vishnu and Shiva with the help of other devas had created a goddess from their anger. That was the goddess Durga the other form of Parvati. Then all gods had given power and weapons to her to fight against Mahisasura. Durga had defeated all armies of mahisasur. Devi Durga’s lion killed the animal form of mahisasur, that was buffalo. Then durga defeated mahisasur and put the trident of Lord Shiva in Mahisasur’s chest. At last he fell dead and the scattered surviving remnants of his once invincible army fled in terror. Then all the supremes were so happy.

Thus Durga the mother goddess is the symbol of all the auspicious and true qualities which define the supreme being. Of all her forms, devi durga is the ultimate representation of infinite power, purity and strength which resides within the divine essence of every being.
by Rashmita Nayak
Leave your comment
Blog search
Blog archive